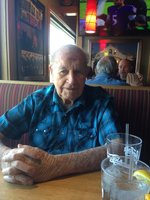 Wayne was born in Madera CA. April 17, 1924 To Gladys and Carl Ballerstein. They later moved to Richmond, CA where he graduated high school. He was drafted into the US Army in 1943 where he was a Tech 5 mechanic. He received a WW2 victory medal and a Phillipines liberation ribbon with one bronze star. He also received an American campaign medal and good conduct medal. He was honorably discharged on jan. 18, 1946. After returning from the Army, Wayne worked at several different auto shops as a mechanic, before opening his own shop in Walnut Creek, CA. in 1952. He went on to open several different shops, and retired in 1991 from his W. B. Transmission shop in Concord, CA. Wayne had a passion for Hudsons. He owned several throughout his lifetime. Wayne is survived by his sons Kenneth Ballerstein of Urbana, MO., Carl Ballerstein (Cyndie) of Martinez, CA and Dennis Ballerstein of Tucson, AZ: Daughters Carol Lynch of Concord, CA and Denise King of Caldwell, ID. His brother Lester "Buddy" Ballerstein (Jean) of Auburn, CA. who misses him very much. He is also survived by 12 Grandchildren and 18 Great Grandchildren. Several nieces and nephews and many friends. Wayne was preceded in death by his wife, Mary Ballerstein and daughter Sandra Flores. Services are not scheduled yet.