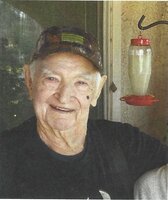 Donald Leroy Shilling, beloved father, grandfather, uncle and friend passed away peacefully at home October 28, 2021, at the ripe old age of 91. With his positive outlook, uncomplaining nature, twinkling blue eyes, dry sense of humor and strong moral sense, he was truly a genuine and honest man. Born in Lodi on December 28, 1929, Don was the second child of Theodore Lawrence (birth name Thomas Laker) Shilling of Odell, Arkansas, and Anna Elizabeth Goehring of Zap, North Dakota, whose family was part of the Black Sea Germans from Russia migration. Don was preceded in death by his parents, both brothers, “Sonny” Theodore D. in 1940, and “Eddie” Edward Albert in 1986, and his wife of 61 years, Patricia Colleen Curran Shilling in 2012. A child of the Depression, he was raised to work hard, first as a 4 yr old with 7 yr old Sonny labeling fruit boxes built by his parents at night on the cold docks of the Sacramento river. He worked before and after school in packing sheds, vineyards and farms. Don drove a tractor before he drove a car, knew to wash his hands with green tomatoes, and to keep a cherry pit in his mouth while picking. He wrapped Christmas presents at Sprouse-Reitz (and never wrapped another present again). Later, Don’s summer resume included Lodi icons: Goehring Meat, Valley Lumber, Hotel Lodi, Lodi Cabinets, Supermold, and General Mills, where he synchronized the firing of the Cheerio guns so he had 7 minutes to run up to the roof and wave to lucky friends swimming at Lodi Lake. Graduating in 1948, he drove a tow truck for Flower Garage, was an oiler on a gold dredger on the John Day River, drafted custom homes for Raab Engineering, and surveyed for the US Bureau of Reclamation as a rod and chain man. In 1951, a newly married man, he settled on a career with Pacific Telephone and Telegraph (later Pacific Bell). A staunch union man, as a lineman he trailered in 45 foot poles, meeting himself coming and going on the dirt and gravel switchbacks of the Sierra Nevadas and Yosemite Valley. He climbed several thousands of these poles in heat and cold, rain and wind, in 22 years as an installer-repairman, surviving a high fall from a pole early in his career. He retired as an Inspector Mechanic after 42 years of service. Don enlisted in the California Army National Guard Battery D, 143rd Field Artillery in Lodi, much later transferring to the US Army Reserve, 481st Transportation Company, (Heavy Boat) in Rio Vista retiring in 1989. He devoted time to his small ranch, raising Zins and walnuts. In his spare time, he worked at Delta Packing as a mechanic, then as a full time care giver for his family, including KP and laundry duty. His three visits weekly to a Stockton care facility for 14 years earned him an assigned parking space and the employee’s access code. A life-long learner, Don attended Needham School and graduated from Lodi Union High School in 1948, where he had met the love of his life, Patricia Colleen Curran, originally of Spokane. Don converted to Catholicism to marry Patricia, a union lasting 61 years. Don and Pat loved dancing, road trips, meeting people and exploring new places. Together they trained champion Golden Retrievers and were founding members of the San Joaquin Dog Training Club. Many a dog learned off leash sit-stay-come-heel under their tutelage. Successfully creating a life and family together, theirs was a warm, happy and loving home for their three children, and two foster children, which became a neighborhood gathering place. They were caring and very proud parents of Donald D. Shilling of Lodi, Mary D. Bippus of Stockton, and Marguerite A. Shilling of Lodi, and doting grandparents to Matthew W. Bippus of Lodi. They had 12 nieces and nephews and lost count of their grand nieces and nephews. After all the work was done, it was time for fun. Don and Pat took their kids and dogs and friends and went camping, backpacking, bottle hunting, crabbing, diving for abalone, and to every historic marker or museum on the way. Although Don only caught rocks while surf fishing, he kept at it. Sand flew fast and furiously when digging for horseneck clams. They did barbeques and potlucks and picnics for every conceivable holiday, or just because it was the weekend. Don was smart, funny, always good natured, calm in a crisis, and blessed with integrity and great common sense. He made friends easily, and kept for a lifetime. He was generous with his knowledge and time and extensive tool collection. He believed in giving second chances. Don could engineer or jerry rig a solution for almost any mechanical or structural problem. He gave excellent and well thought out advice, but only when asked. Meticulous and a fine craftsman, Don loved woodworking, dogs, John Wayne movies, singing along with honky tonk, Otter Pops, dancing with Pat. Mostly he was devoted to and loved his family and friends. He detested liars and his cell phone, which he could not answer, causing him to drive home to use his land line to return the call, lamenting the loss of the pay phone. Don never complained or made negative comments, when things went awry his mantra was “these are the golden years”. Don was one of a kind, we treasure our memories of him, and will miss him dearly. Friends are invited to attend a Celebration of Life on Friday, November 19 at 10am at Lodi Funeral Home, 725 S. Fairmont Ave. Private inurnment at Lodi Memorial Park with Military Honors will follow at a later date. In lieu of flowers, please donate to a charity of your choice, or spend special time with someone you love.