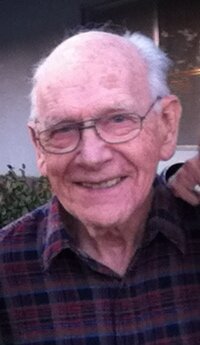 Please share a memory of Charles to include in a keepsake book for family and friends.
View Tribute Book

Charles David (Dave) Ford was born in New York, NY, on Jan. 9, 1919 (1/9/1919) to Harold W. and Ruth (Dias) Ford. He grew up in Madison, New Jersey and graduated from the University of Michigan with a degree in Mechanical Engineering. He joined the army in WWII and was chosen by Edwin Hubble (of Hubble Space Telescope fame) to work on a mission at the Maryland armament station blowing up German and Japanese bombs at night in an effort to understand what made them so special. He was transferred to Muroc Airforce Base, now Edwards Air Force Base in Southern California. Dave loved California and though he took an engineering job in Chicago (a good way west of New Jersey) after the war, he vowed he would someday be back in California. A couple of years later he was living and working in Santa Clara, California now Silicon Valley. There he started working for Pittsburg-Des Moines Steel Co. and worked with them for 30 years until his retirement in 1984.

He and Virginia were very involved with Quail Lakes Baptist Church. Dave was still a deacon at age 95. When it was his turn to open the church at 7:00 am (or earlier) he was there. He was involved with the Tuesday men’s group at the church picking up (and taking home) men who no longer drove. Dave drove until he was 100, and lived alone in his house after the death of his wife 15 years prior as he did for 58 years until his last 10 months. Dave Ford passed away peacefully on Sunday, Oct. 17, 2021. He was preceded in death by his brother and sister.

To send flowers to the family or plant a tree in memory of Charles Ford, please visit Tribute Store
Online Memory & Photo Sharing Event
Online Event
About this Event

Look inside to read what others have shared
Family and friends are coming together online to create a special keepsake. Every memory left on the online obituary will be automatically included in this book.
View Tribute Book
Services for Charles Ford
There are no events scheduled. You can still show your support by sending flowers directly to the family, or planting a memorial tree in memory of Charles Ford.
Visit the Tribute Store

Share Your Memory of
Charles
Upload Your Memory View All Memories
Be the first to upload a memory!
Share A Memory
Send Flowers