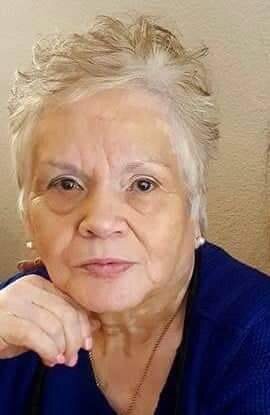 Please share a memory of Trudy to include in a keepsake book for family and friends.
View Tribute Book

Trudy f. Salaices was born in Nogales, Arizona to Manuel and Josefina Felix

Mrs. Salaices was an active and faithful member to St. Anne’s Church in Lodi.  She served as a Eucharistic Minister for 17 years.

She was an active member of the Legion of Mary and The Sisters of Isabella.

Trudy enjoyed dancing. She was the Queen of the Mambo. She loved music, boxing, baseball and spending time with her children,

grandchildren and friends.  She will be remembered as a loving wife, mother, grandmother and great grandmother.  She will

Trudy joined her husband  Alejandro Salaices on the anniversary of his death December 5th.  They were married for 47 years.

And Rosemarie Salaices of Lodi .  She is preceded in death by one daughter  Olga Salaices in 1975.

Frank Felix all of Woodland, California

Michael Nunez, and Mathieu and Megan Landre.  She had 8 great grandchildren, Audrey, Cru and Reese Faucett, Sebastian and Silas Galeste,

On Monday December 13th there will be a visitation  from 1-6pm.  Followed by a rosary to be held at 6:00pm at Lodi Funeral Home.  A church service will be

To send flowers to the family or plant a tree in memory of Trudy Salaices, please visit Tribute Store
Monday
13
December

Share Your Memory of
Trudy
Upload Your Memory View All Memories
Be the first to upload a memory!
Share A Memory
Send Flowers