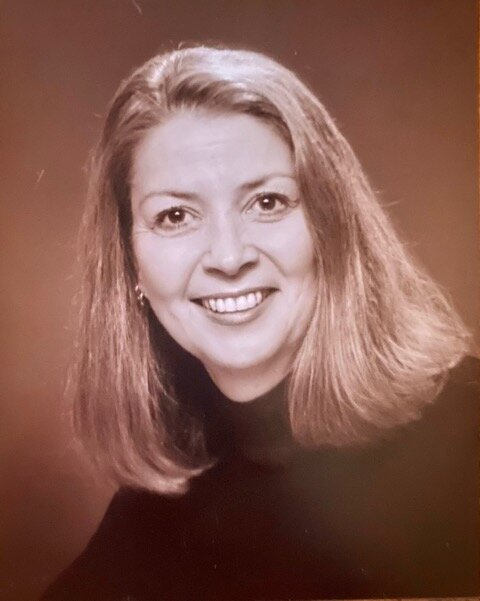 Please share a memory of Melinda to include in a keepsake book for family and friends.
View Tribute Book

Melinda Meyer Niemi died January 8, 2022 at her Memory Care facility at Brookdale in Lodi. She was born to Henry Norton Meyer and Carolyn Holloway on June 6, 1947 in Chico, Ca. Her childhood years were spent on their apple ranch on Lovely Lane in Paradise, California. Melinda and her family moved to Stockton so she and her older sister, Carol Diane Meyer, could attend Stockton schools. But they traveled back to Paradise every Friday evening, returning to Stockton on Sunday.

In Stockton, Melinda attended Victory, Jackson, Webster, and Stagg High School. In high school, Melinda was involved in The Stagg Line newspaper, Girls’ Athletic Association, and attended both the Congregational Church and the Unitarian Church. She was a proud member of the Stagg High School Class of l965.

Melinda chose to attend college at Pacific University in Forest Grove, OR, where she met and married her husband, John. Together they started a family with their son, Reed, being born. John was drafted that same year, and Melinda traveled with their newborn to live in Stockton briefly before reuniting as a family to live in San Diego, followed by a two year duty on Guam. In 1972 the family returned to Stockton.

Back in Stockton, Melinda finished her bachelors degree in Philosophy, then went on to secure a Master of Arts in Counseling from Stanislaus State in Turlock. After graduation, she worked as a high school crisis counselor and trained student peer facilitators for Modesto Unified at Grace Davis HS. She also taught, in the evenings, in the graduate program for counselors at Stanislaus State. In Stockton, Melinda was one of the first counselors to be hired by the County Office of Education when they began the “one. Program” as an alternative for high school youth.

Hired by the Unitarian Church to run their church school, Melinda wrote curriculum and staffed the school for 21 years. During this time came her involvement with Children’s International Summer Village (CISV) and Wednesday night youth groups in her home. With CISV, a peace youth group, Melinda took four local 11-year-olds to Trondheim, Norway for a month-long Village. She also helped, organized, and executed a Peace Village in Hayward, CA. Because of her attention and devotion to youth, Melinda was honored with a Susan B. Anthony Award for Religious Education in 1998. She continued in her counseling profession, servicing countless at-risk youth throughout San Joaquin County until her retirement in 2013.

Melinda’s character was shaped by many influences. There were the forts she and her dog, Tiny, made throughout the apple orchard, waiting quietly for the fawn to sit beside them. She had a love of singing in choirs and at Rolling Stone concerts. She attended the Model United Nations in San Francisco and listened to Dag Hammarskjold speak. Her two broken legs because of a drunk driver when she was 12 inspired her to teach drug and alcohol cessation to youth. She was a ping pong champion, having been coached by Don Campora. She was on the “Kids Art Fest'' steering committee. She entertained family and friends with her Annual 3rd of July parties complete with fireworks.

Melinda was a cheerleader for Stockton. She loved her family, which always included her dear friends. Melinda had a passion for all things fun: road trips, camping adventures, foreign travel, dancing in the Delta, and sharing stories and toasts with loved ones. Her basic belief was kindness, which she modeled daily throughout her 74 years.

Melinda was preceded in death by her loving parents, Henry “Bud” Meyer and Carolyn Atsie Holloway, as well as her spirited sister, Diane Meyer. Melinda is survived by her husband of 54 years, John Niemi, son, Reed Niemi, daughter in-law, Sheli Ayers, two granddaughters, Katie Niemi Ambas (Carlos), and Anu Niemi Ayers. Melinda was also loved deeply by numerous family and friends with whom she chose to surround herself.

A Celebration of Melinda’s Life will be scheduled at a later date. In lieu of flowers, donations in Melinda’s name can be made to the Robert Edward Green Memorial Scholarship Fund at the Unitarian Church in Stockton, 2737 Pacific Ave., 95204.

Melinda’s family would like to extend special thanks to Vitas Hospice Nurses, Nurse Patti, and all of Melinda’s caregivers at Brookdale Memory Care and O’Connor Woods.

To send flowers to the family or plant a tree in memory of Melinda Niemi, please visit Tribute Store
Online Memory & Photo Sharing Event
Online Event
About this Event

Look inside to read what others have shared
Family and friends are coming together online to create a special keepsake. Every memory left on the online obituary will be automatically included in this book.
View Tribute Book
Services for Melinda Niemi
There are no events scheduled. You can still show your support by sending flowers directly to the family, or planting a memorial tree in memory of Melinda Niemi.
Visit the Tribute Store

Share Your Memory of
Melinda
Upload Your Memory View All Memories
Be the first to upload a memory!
Share A Memory
Send Flowers