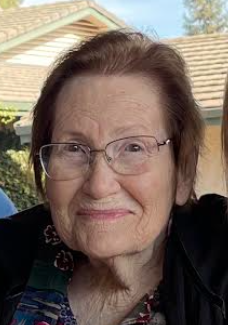 Please share a memory of Noma to include in a keepsake book for family and friends.
View Tribute Book

Noma Louise Sawtelle, 95, of Lodi, California, passed away on January 16, 2022. She was born to parents Hazel & Floyd Clothier, on 11/27/1926 on a farm in rural Kansas. The family (including her only sibling, sister Carol Biggs (12/3/1933-1/28/2015)) moved to Washington State and eventually to Fresno, CA. during the Great Depression, where she graduated from Fresno High School in 1943 and then completed business school.

After Stephen Roger Hubbard’s passing in ‘71 (he was affectionately known as Duke), it was with great courage and stamina, that she continued to raise and guide her three teenage children as a single mother. The second of her long and successful marriages was to Donald Courtland Sawtelle (4/30/1925-2/20/2004), a Navy combat veteran of WW II, on 4/8/73.

She spent the bulk of her adult life raising her family and residing in Bakersfield and Stockton CA. creating wonderful homes, while her younger children attended public schools and her son, Steve, eventually matriculated at the University of the Pacific in Stockton, on a full athletic scholarship.

Noma worked as an administrative assistant at the San Joaquin County Health District, finally retiring after 20 years of service in 1989.

She spent her final years in a private residence affiliated with the Loel Center in Lodi, CA. and remained very active at the Center with so many dear friends until her passing. She frequently traveled to visit her children and their families on holidays and other major events.

She enjoyed music, Bible study, reading, attending the theatre, gardening, cooking, and baking, and vigorously socializing at the Loel Center, where she was an active and ever-present member since 2006. She’ll always be remembered there for her warm reception of the members as they checked in for lunch at the front table where she served as a hostess.

She was a member of Mayfair Christian Church in Stockton for 56 years. She was a devout Christian who lived and practiced the principles of Christianity daily. She was a Sunday school teacher and member of the church choir. She offered prayers daily for her family and friends until her passing.

By far, her greatest joys in life were her relationships with her many family members and friends. It was rare to see her without a smile on her face. She loved people and thrived on the company of others. She lived most of her widowed life on her own-she still drove her own car into her late 80s! She was a supportive and positive force–a beacon of love and light.

May she rest in peace.

Mortuary Services were provided by Lodi Funeral Home. A graveside service will be held at 11:00 am on Monday January 31 at Stockton Rural Cemetery, 2350 Cemetery Ln. Stockton, 95204. All friends and family are welcome to attend. In lieu of flowers, please honor Noma’s memory with donations to the Loel Senior Center, 105 South Washington St., Lodi CA. 95240 (209) 369-1591

To send flowers to the family or plant a tree in memory of Noma Sawtelle, please visit Tribute Store
Monday
31
January

Share Your Memory of
Noma
Upload Your Memory View All Memories
Be the first to upload a memory!
Share A Memory
Send Flowers