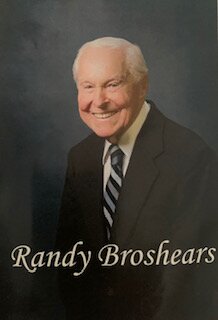 Please share a memory of Randolph to include in a keepsake book for family and friends.
View Tribute Book

Randolph S. “Randy” Broshears, passed away on January 15, 2022 with his beloved daughter Rachel and granddaughter Christi by his side, one day before his 99th birthday.

Randy was born January 16th, 1923, in Evansville, Indiana. His family moved to Southern California when he was very young. Upon returning from serving in WWII, Randy married Rachel “Rae” Lynn and they had a daughter, also named Rachel.

Randy served honorably in WWII with the European Theater IX Troop Carrier Command, working in the gliders unit. Upon returning from the military, Randy worked for Weber Showcase and then Hill Refrigeration until his retirement. Randy loved the game of golf and was an avid golfer. He was a respected course marshal and judge for golf tournaments in southern California. Randy was a long time member of both Friendly Hills Country Club and Candlewood Country Club, serving twice as club president for Candlewood. Randy was a very charming, generous man with a beautiful smile. Always suave and a sharp dresser, he enjoyed meeting new people, flying with friends, and treating family and friends to memorable dinners out. Randy lived the majority of his life in Southern California until two years ago when he moved to Lodi, California to be with his family.

Randy is predeceased by his first wife Rae and second wife Jo. His is survived by his daughter Rachel, granddaughter Christi, great grandson Otis, his five wonderful nieces Lark, Kim, Cecelia, Jeanette, Colleen, and his stepson Jack. Randy will be remembered as a most sincere, kind man and will be dearly missed by all. Per his request, his ashes will be spread in Southern California. A Celebration of Life will be held at a later date.

To send flowers to the family or plant a tree in memory of Randolph Broshears, please visit Tribute Store
Online Memory & Photo Sharing Event
Online Event
About this Event

Look inside to read what others have shared
Family and friends are coming together online to create a special keepsake. Every memory left on the online obituary will be automatically included in this book.
View Tribute Book
Services for Randolph Broshears
There are no events scheduled. You can still show your support by sending flowers directly to the family, or planting a memorial tree in memory of Randolph Broshears.
Visit the Tribute Store

Share Your Memory of
Randolph
Upload Your Memory View All Memories
Be the first to upload a memory!
Share A Memory
Send Flowers