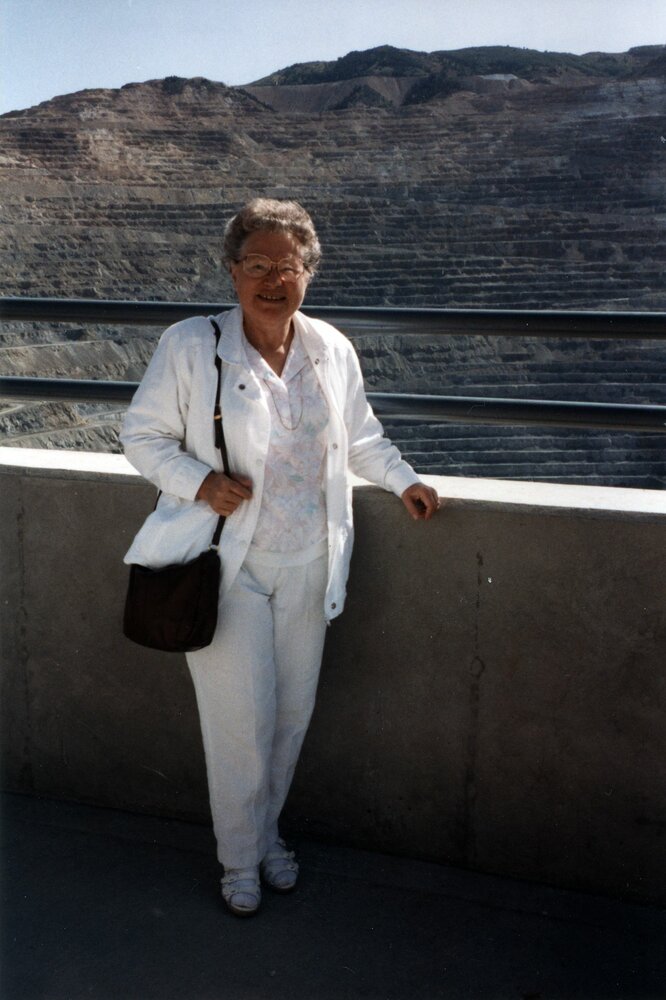 Please share a memory of Hazel to include in a keepsake book for family and friends.
View Tribute Book

Our dear Aunt Hazel Yvonne McCaughna died on March 8th 2022 in Vacaville, California. Hazel was the widow of Robert Edgar McCaughna (deceased 2010). Hazel was born on 29th January 1928, in Hayes, Middlesex, England. Hazel was the youngest of four siblings. Hazel was close to all her three siblings. Hazel’s Father, our Grandfather, Horace, was a train driver, he drove steam engines on long distance routes in England throughout his working life which included two wars. Although he volunteered in the first war he was not allowed to enlist because engine driver was an essential occupation. Our Grandmother, Alice Amelia, worked as a housekeeper as well as caring for her own family. Our Grandparents were hard working, lovely, kind people.

Hazel remembers her childhood as very happy although overshadowed by the Second World War which began when she was 11 years old. Hayes was the site of many important aircraft industries, and is close to Heathrow which then was the site of test runways for the industry. Consequently Hayes was a target for German bombs. Hazel remembers a childhood spent in air raid shelters, and in constant fear. She never forgot the many people, young and old, she had known who died in the war, including her cousin who was an RAF pilot.  Her childhood was also overshadowed by illness. Hazel had wanted to train to be a nurse but this was not allowed because of her ill health.  Hazel worked on a fruit and vegetable farm as outside work was considered safer and beneficial. As her health improved Hazel became more adventurous. She worked in the offices of the National Archive and for the Post Office as an operator on one of the first computers in service in England. She spent much of her free time as a volunteer. She trained as a Red Cross nurse and at weekends she would attend big sporting events or other events such as Billy Graham’s meetings as a volunteer nurse. She was a Cub and Scout mistress, spending one evening a week with the Cubs and Scouts, attending church with them on Sundays and taking them on camping holidays. This was really exciting for the boys as holidays were unusual after the war. Hazel managed all these activities on her bicycle, cycling many miles each day. She only learnt to drive when she moved to the US.  Hazel was fun, she was the kindest and most unselfish of people, she always had time for us, her nieces and nephews and for others.

Later in her thirties, Hazel started going on Holiday Package Tours to Europe. On one of these trips Hazel met Bob (Robert Edgar McCaughna). Bob lived in California with his Mother whom he looked after until her death. Hazel and Bob corresponded after the holiday and then he visited Hazel at her home and met our Grandfather. Grandmother had died a few years before.  We were all thrilled when we heard that Hazel and Bob were getting married, and that Hazel was starting a new life with Bob in California. This was 1969 and thus began a long and happy marriage.  Bob worked as an economist. Initially they lived in Carmel, where Hazel ran a gift shop, and then retired to Vacaville in 1988. They spent holidays touring the US, Hazel loved the National Parks.  She did not forget us in England and every two years Hazel and Bob crossed the Atlantic to visit family. Despite her many friends in the US and her love of her adopted country Hazel spoke like a true Londoner until the end, she never lost her English accent.  We shall miss her forever.

To send flowers to the family or plant a tree in memory of Hazel McCaughna, please visit Tribute Store
Online Memory & Photo Sharing Event
Online Event
About this Event

Look inside to read what others have shared
Family and friends are coming together online to create a special keepsake. Every memory left on the online obituary will be automatically included in this book.
View Tribute Book
Services for Hazel McCaughna
There are no events scheduled. You can still show your support by sending flowers directly to the family, or planting a memorial tree in memory of Hazel McCaughna.
Visit the Tribute Store

Share Your Memory of
Hazel
Upload Your Memory View All Memories
Be the first to upload a memory!
Share A Memory
Send Flowers