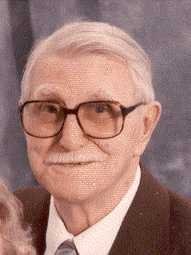 Please share a memory of Joseph to include in a keepsake book for family and friends.
View Tribute Book
Joseph Otto Hohn, 89, of Lodi, entered into rest on May 4, 2003, at a local convalescent hospital after a long illness. Born on August 27, 1913 in Pierz, Minnesota, Joe worked on the family farm until they moved to Flint, Michigan. In Michigan he was employed by the Tank Division of Fisher Body at General Motors. In 1944 he enlisted in the U.S. Army. Because of his ability to speak German, Joe was assigned to work with the refugee program. At that time, the Germans could not have guns, so Joe spent his leisure hours hunting in the forest of Germany. When he was successful, he would bring any deer he caught to the townspeople who were always grateful for the food. In 1950 he was assigned to Camp Carson, Colorado. Shortly thereafter, he was sent to Korea fror Decembre 1950 to January 1952. While at Camp Carson, he met Marie Hoffmann, and upon his return form Korea they were married on May 14, 1952 in Colorado Springs, Colorado. Mr. Hohn led a successful military career, attaining the rank of Master Sergeant, with service in Nurenberg and Heidelberg, Germany, Korea, and many stateside posts in Indiana, Colorado, Ohio and Claifornia. After his retirement in 1965, he moved to Lodi, California. Having learned the trade of watch and clock repairing while in Germany, he opened shop in Lodi in 1970, "The House of Clocks", with locations in Lodi and Lincoln Center in Stockton. Mr. Hohn was a member of St. Anne's Catholic Church in Lodi; American Legion Post No. 22 in Lodi; National Association of Watch and Clock Collectors. He was an avid sports fan. In his youth he played semi pro baseball as a catcher for the Minneapolis Millers. He played golf in his later years and turly enjoyed it. He also enjoyed watching his grandsons play baseball. Joseph Hohn is survived by his wife of 50 years, Marie A. Hohn of Lodi; 4 sons: Marty Hohn of Sacramento; Mike Hohn of Stockton; and Steven Hohn and Chuck Hohn, both of Lodi; one daughter; Ann Genia of St. Paul, Minnesota; 10 grandchildren and 5 great-grandchildren. In lieu of flowers, memorial contributions to: St. Anne's Catholic School, 215 W. Walnut Ave, Lodi, CA 95240; the Lodi Memorial Hospital Foundation, 999 S. Fairmont Avenue, Suite 110, Lodi, CA 95240; or the Lodi Veterans Memorial, P.O. Box 3006, Lodi, CA 95241 are preferred. Lodi Funeral Home in charge of arrangemetns. 725 S. Fairmont Avenue, Lodi, CA 95240 (209) 369-2564
To send flowers to the family or plant a tree in memory of Joseph Hohn, please visit Tribute Store
Online Memory & Photo Sharing Event
Online Event
About this Event

Look inside to read what others have shared
Family and friends are coming together online to create a special keepsake. Every memory left on the online obituary will be automatically included in this book.
View Tribute Book
Services for Joseph Hohn
There are no events scheduled. You can still show your support by sending flowers directly to the family, or planting a memorial tree in memory of Joseph Hohn.
Visit the Tribute Store

Share Your Memory of
Joseph
Upload Your Memory View All Memories
Be the first to upload a memory!
Share A Memory
Send Flowers