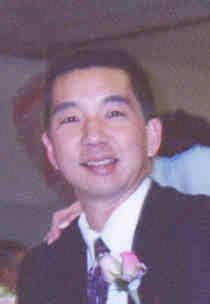 Please share a memory of Edwin to include in a keepsake book for family and friends.
View Tribute Book
Edwin M. Sakauye was born March 27, 1963 in Sacramento. He passed away in Folsom on April 28, 2003 at the age of 40. Edwin was raised and educated in Sacramento. He graduated from John F. Kennedy High School in 1981, during his High School years he was a member of the John F. Kennedy Marching Band, he also practiced Karate, earning his Green Belt. After High School he went on to attend California State University, Sacramento. He then worked at PriceClub for many years as a manager until June of 1986 when he became P.O.S.T. Certified and began his career as a Correctional Officer. In 1999 he met Deidre Dunn and the couple was married in Lake Tahoe on January 12, 2002. They made their home in Folsom, California. Edwin enjoyed all types of sports, he was into body building and enjoyed working out at Capital City Athletic Club, he loved playing basketball and attending sporting events, he enjoyed the Sacramento Kings and the 49ers. He played the piano and the Saxaphone and whenever possible, he liked to sneak away for trip to Reno or Lake Tahoe. He was a member of the California Peace Officers Foundation, the Correctional Peace Officers Association and attended the Sacramento Japanese United Methodist Church. Edwin leaves to cherish his memory, his wife: Deidre Sakauye of Folsom, Stepchildren: Jessica and Courteney Stewart of Folsom, Parents: Shoji and June Sakauye of Sacramento, and his brother; David Sakauye and his wife Kaori of Sacramento. Friends may visit Saturday from 2 p.m. until 8 p.m. at Sacramento Memorial Lawn and Garden Chapel Funeral Home, 6100 Stockton Blvd, Sacramento and are invited to attend Memorial Services on Sunday at 4 p.m. at Sacramento Japanese United Methodist Church, 6929 Franklin Blvd. Memorial Contributions may be made to the Church Legacy Fund. Arrangements are entrusted to the care of Lodi Funeral Home with our gratitude to the staff of Sacramento Garden Chapel for the assistance.
To send flowers to the family or plant a tree in memory of Edwin Sakauye, please visit Tribute Store
Online Memory & Photo Sharing Event
Online Event
About this Event

Look inside to read what others have shared
Family and friends are coming together online to create a special keepsake. Every memory left on the online obituary will be automatically included in this book.
View Tribute Book
Services for Edwin Sakauye
There are no events scheduled. You can still show your support by sending flowers directly to the family, or planting a memorial tree in memory of Edwin Sakauye.
Visit the Tribute Store

Share Your Memory of
Edwin
Upload Your Memory View All Memories
Be the first to upload a memory!
Share A Memory
Send Flowers